Beef ribs are a great summer barbecue item if you can get good ribs with lots of meat on them. I was lucky enough to be given some that were about three inches thick, and asked to smoke them on the Traeger Wood Fired Grill. 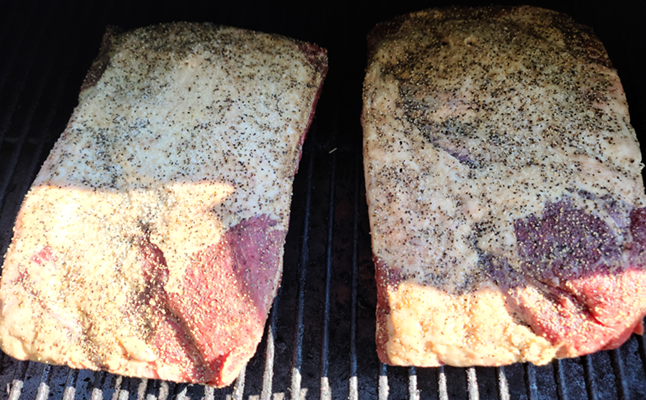 I let the ribs thaw for 24 hours in the fridge, then rubbed them with Kosher salt overnight. This is called dry-brining. Kosher salt is best because it is easy to control how much you put on, and where it goes. Table salt is too fine, which makes it too easy to over-apply. Salt the meat with the amount that you feel will give you the flavor you want, but remember: salt isn’t just for flavor. Salt also helps the meat hold onto its moisture. It is the only spice that significantly penetrates the meat, but you have to give it time to work. An hour is good; overnight is best. If you don’t have at least an hour to dry brine, you can still use salt, but put it on right before the meat goes on the grill. 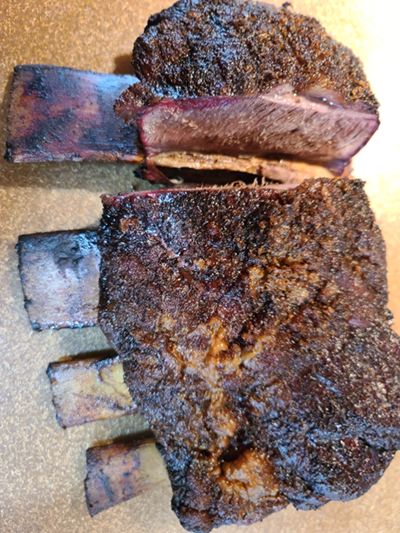 I put my spice rub on the meat at the same time as the salt, but it isn’t necessary to do it that way, just convenient. The other spices remain on the surface of the meat, and don’t penetrate significantly. No “binder” is necessary or 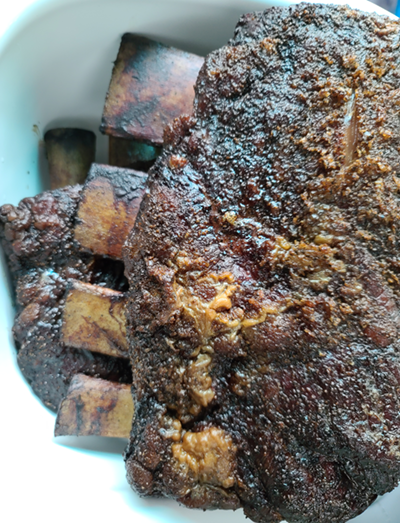 desirable. Salt will bring enough moisture to the surface to make it plenty tacky to hold a spice rub. Other goo or oils will reduce the amount of smoke that gets to the meat and spoil the bark.

Bark is the salty, rich, savory, flavorful, crunchy crust that forms on meat when cooked low and slow. In my opinion, it is the best part. Great bark comes from salt. I don’t use sugars for long cooks because they can burn and turn nasty. These ribs were treated with roughly equal parts Kosher salt, black pepper, and garlic granules. Simple rubs can be the best, and sometimes less is more. However, if you have a favorite rub for beef, there is nothing wrong with using it. I serve a variety of preheated sauce choices at the table.

Smoking was very straightforward. We set the grill on 180ºF and put the meat directly on the grate, bones-side down. After four hours, we turned the temp up to 225ºF. The meat went on right away at 8:00am and stayed there until 6:00pm, 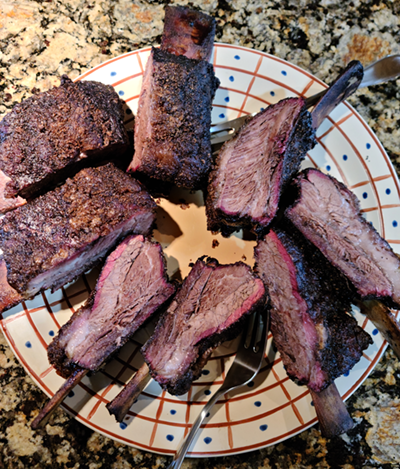 or 10 hours total. I expected to take the meat off the grill when the Internal Temperature (IT) hit 205ºF. The stall started at about 170ºF IT and lasted about three hours. Dinner was scheduled at 6:30pm and I wanted some time for the meat to rest, so I was glad when the probe went into the meat like it was soft gelatin at 201ºF IT.

The ribs were a hit! They had great bark, were super tender and juicy, not quite falling off the bone, and tasted wonderfully beefy. Most of the group only ate one rib, which was quite a bit of meat. The fat guy at the table had two plus a few scraps, but that’s ok because he did all the work.