Brisket Is Made For The Traeger 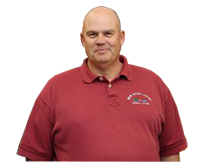 My favorite thing to make on the Traeger is the brisket. It’s a delicious moist cut of beef that many consider too hard to attempt. I’ve found the brisket to be very forgiving if you have the patience to let it cook.

The best way to start out is to search on the Traeger website for a recipe. There are quite a few brisket recipes on Traeger's website. I don’t follow any of them exactly any more. I recommend that you follow one of them for your first cook.

Trimming is the first thing to do. You want to remove all of the hard fat from the brisket because it won’t render. You need to trim all but a quarter inch of the soft fat from the outside of the brisket. I’ve found that it’s better to trim too much rather than too little. I learned a lot about trimming from watching a video on Youtube called “BBQ With Franklin: The Brisket.” Aaron Franklin has a BBQ place in Austin Texas and is considered one of the top brisket cooks in the country. One thing I do at this time is to make a light score in the meat along the grain for help when you slice the brisket.

Seasoning is simple. I use Traeger Beef Rub and kosher salt. Cover the meat with a heavy coat of both. It’s a large cut of meat and it takes a lot of seasoning to flavor it. Apply the seasoning 12 to 24 hours before you start the cook. Wrap it and put it back in the refrigerator. We want the salt and seasoning to be absorbed into the meat. Some people recommend you inject the brisket with broth but that’s not necessary.

My favorite pellet flavor for brisket is oak but that’s a personal choice. Many recipes say it takes an hour to an hour and a half per pound for your brisket to cook. My briskets have always been on the low side of that calculation.

Do you cook with the fat side up or down? Traeger recommends you cook it fat down as the fat will protect the meat from the heat. I’m sure that’s correct but cook it the way you want. I’ve done both ways and it doesn’t matter very much.

I start my brisket with 4 hours of smoke time using either the smoke setting or set to 180ºF if it’s cold outside. After the 4 hours of smoke I turn it up to 225ºF and let the brisket cook until the internal temperature reaches 160ºF. 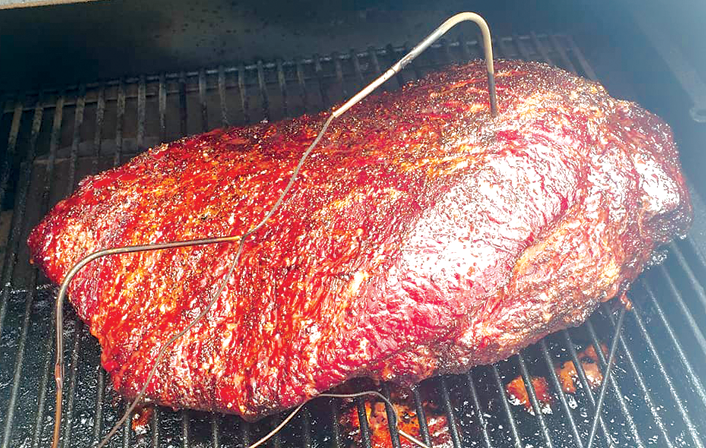 When your brisket reaches 160ºF at its thickest part it’s time to wrap. You can either use aluminum foil or pink butcher paper. Pink butcher paper doesn’t have a coating that could spoil your food. This is different than freezer paper which you don’t want to use. Traeger makes a high quality cooking butcher paper that I have used for both brisket and salmon. They say you get a better bark on your brisket when you wrap with paper but foil works fine.

Put the brisket back on and let it heat up to 204ºF internal temperature. If you pull it before 204ºF you will have a tough piece of meat. You want to measure the temperature at the thickest part of the meat. Don’t worry about temperature variations from spot to spot early in the cook. As you approach 200ºF the temperatures across your brisket will even up.

After you reach 204ºF it’s best to let the brisket rest for at least an hour without unwrapping it. The meat will firm up and also reabsorb some of the juices that it’s lost. It’s best to let it rest in a warmed up cooler. A large brisket will keep for many hours that way. You just don’t want the temperature of the meat to drop below 140ºF for food safety reasons. If it does go below 140ºF, you should reheat to 165ºF+ before serving.

The final step is to slice the brisket. It is important to slice across the grain of the meat so that you don’t have long fibres in your finished product. If you scored your brisket before you seasoned it it’s easy to cut across that at 90ºF. I use an electric knife but you could use a good sharp knife. A good brisket slice will pull apart with only a little tug.

While slicing I separate out the two muscles. There is a layer of fat between the two muscles which you can dispose of. The point (fat part of the brisket) has more flavor but is fattier. The flat is the thin part and that is still very tasty but is leaner.

One great thing about brisket is that it freezes well. The leftovers are just as good as eating it the first time. I like to freeze it into several different servings. A brisket sandwich makes a great quick lunch or dinner.

I had never made a brisket before I bought my first Traeger. Now it’s something I wow the family with.