Legend has it that ancient Scottish warriors would take a medicinal mix of honey, herbs and spices before battle to give them strength and courage, and afterward to help heal wounds. That mixture later became part of the recipe for Drambuie. In today’s world, who doesn’t need strength, courage, and enhanced healing? Whether that works fore you or not, duck with a glaze of Drambuie, honey, Dijon mustard, and caraway is amazingly rich and delicious. 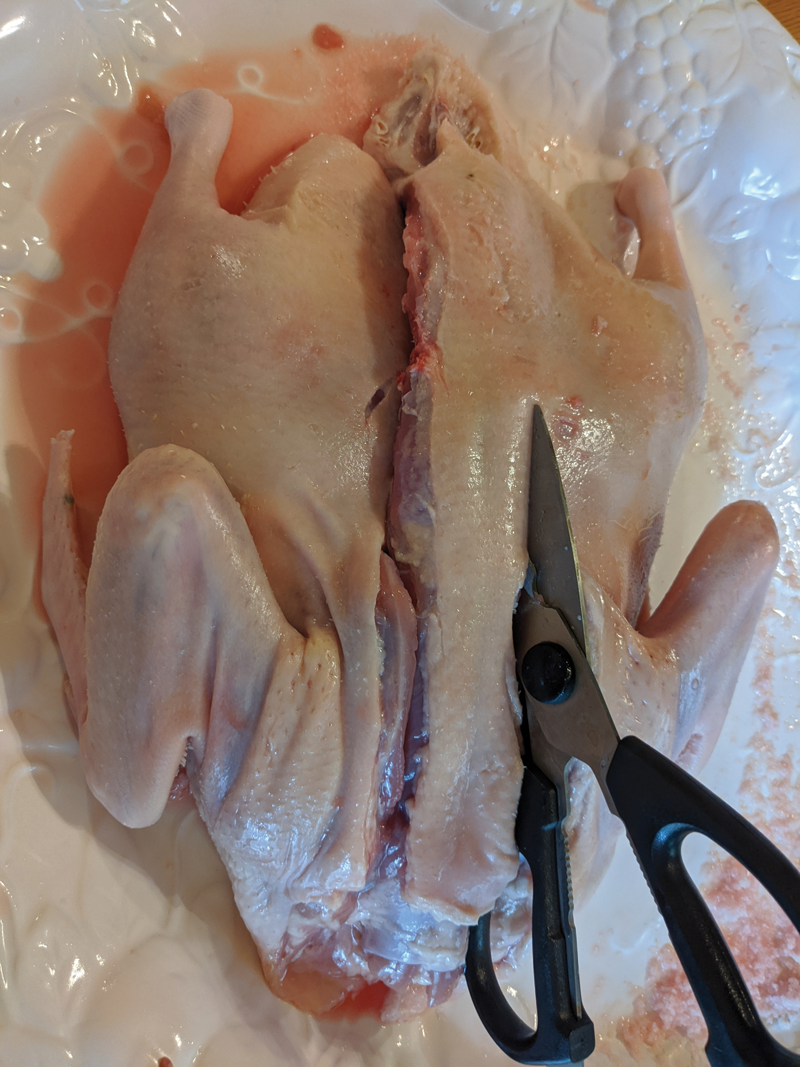 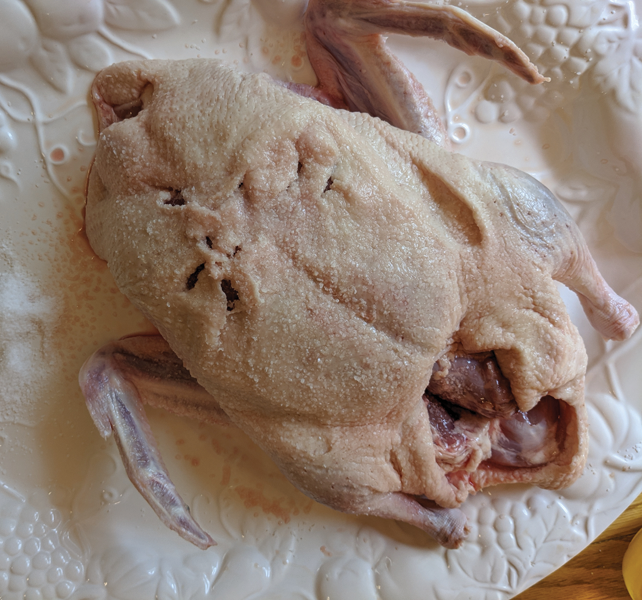 Traeger Pecan Pellets (or other pellets of your choice)

To prepare the duck for smoking:

Work your fingers under the skin over the breasts and rub kosher salt over the breasts. It is best to do this the night before cooking, but try to give the salt at least 45 minutes to work. Duck is naturally juicy and tender, but the salt will add flavor and help the meat hold onto all the moisture it has. Salt needs time to work. At first, it draws moisture to itself. In time, the meat will draw the moisture back, bringing salt with it. This brine will help the meat hold its moisture while cooking. Salt is the only seasoning that significantly penetrates meat.

Ducks have lots of fat under the skin, which must be released for the skin to get properly crispy. To do this, we poke a couple hundred holes, all over the bird, in the skin with a sharp probe. Avoid poking into the meat. This is easiest to do when the skin is loose after opening it up for salting. 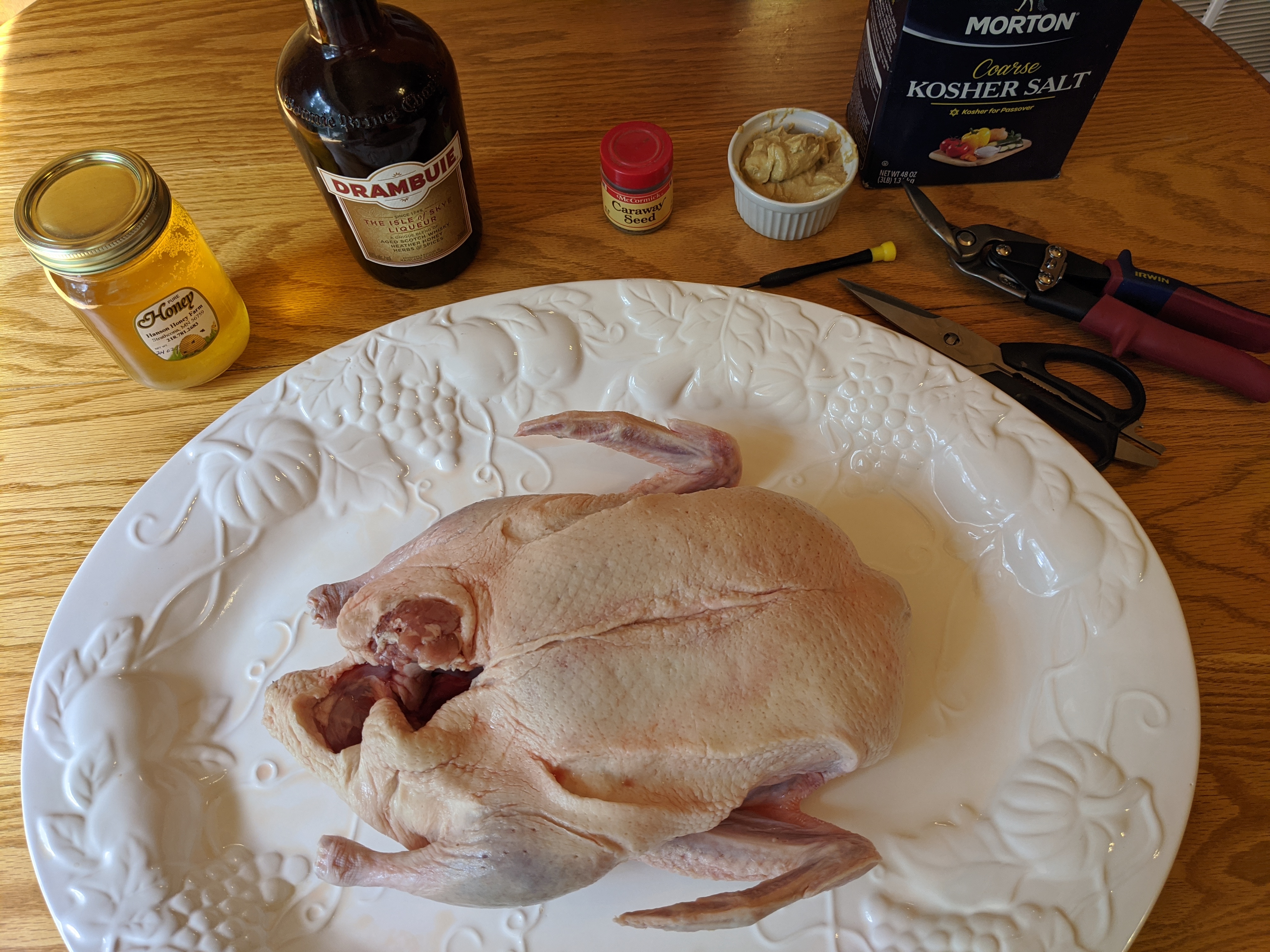 The next step is to tighten the skin. We do this by pouring boiling water over the bird, or dipping into a pot of boiling water.

Next, we split the bird by removing the backbone, a process known as spatchcock. You will get the same result from splitting it into halves, which is probably the best way if serving the duck to two people. Once the bird is split, pat it dry with paper towels. And apply kosher salt to the whole bird, including the cavity area.

Mix Drambuie, Dijon mustard, honey, and about half of the caraway in a pot. Reduce over medium heat to about half volume. While still warm, apply the glaze to the cavity side, then the breast, legs, and all the exposed skin. Reserve the rest of the glaze. Once it cools, you will need to reheat to reapply.

Everything up to this point can be done the night before. Keep the glazed bird refrigerated, then pop on the Traeger grill, skin side up, two hours before your planned mealtime. 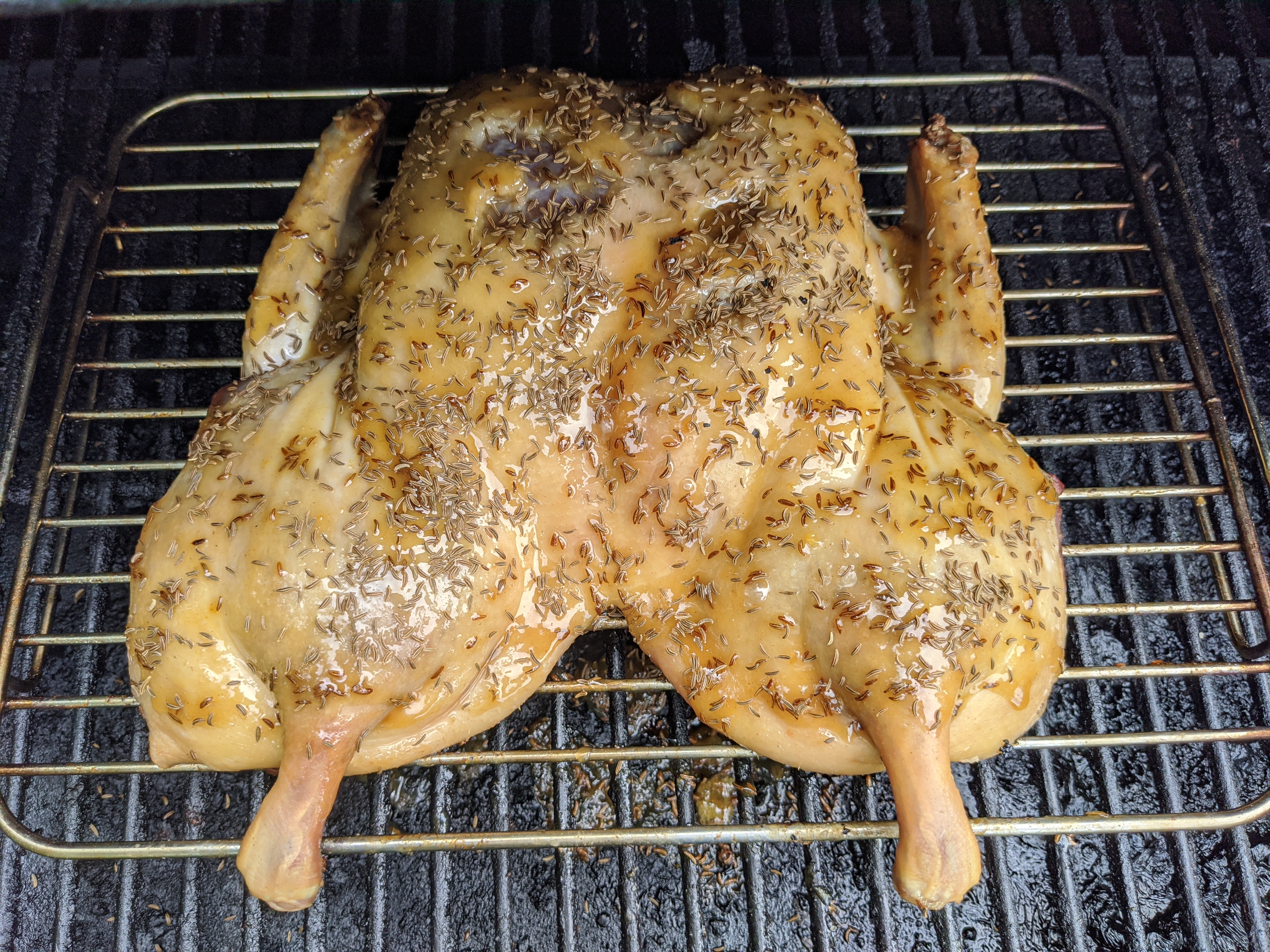 In the Traeger, use the Smoke or 165ºF setting for about 20 minutes for smoke flavor, then turn up the heat to 375ºF. After about the first hour, apply the rest of the glaze and sprinkle the rest of the caraway evenly over the surface.

Poultry is done when the internal temperature reaches 165ºF in both the thigh and breast. To measure, put a probe in the breast, and when it reads 165ºF remove it, and then test the thigh. Both need to reach 165ºF for food safety. Legs and thighs are their most tender best at about 180ºF. Duck is more resistant to overcooking than chicken or turkey, but the breast is still better at 165ºF than 180ºF. Don’t overcook the breast to get the thighs hotter than 165ºF. Most grills have warmer and cooler zones. If you know where your grill is warmest, usually near the chimney, put the legs in that area and leave the breast in the cooler zone.

When the internal temperature of the meat reaches about 145ºF, flip the bird so that the skin side is down. The directional heat from below will help crisp the skin. You can also do this skin side up in a broiler just before serving. 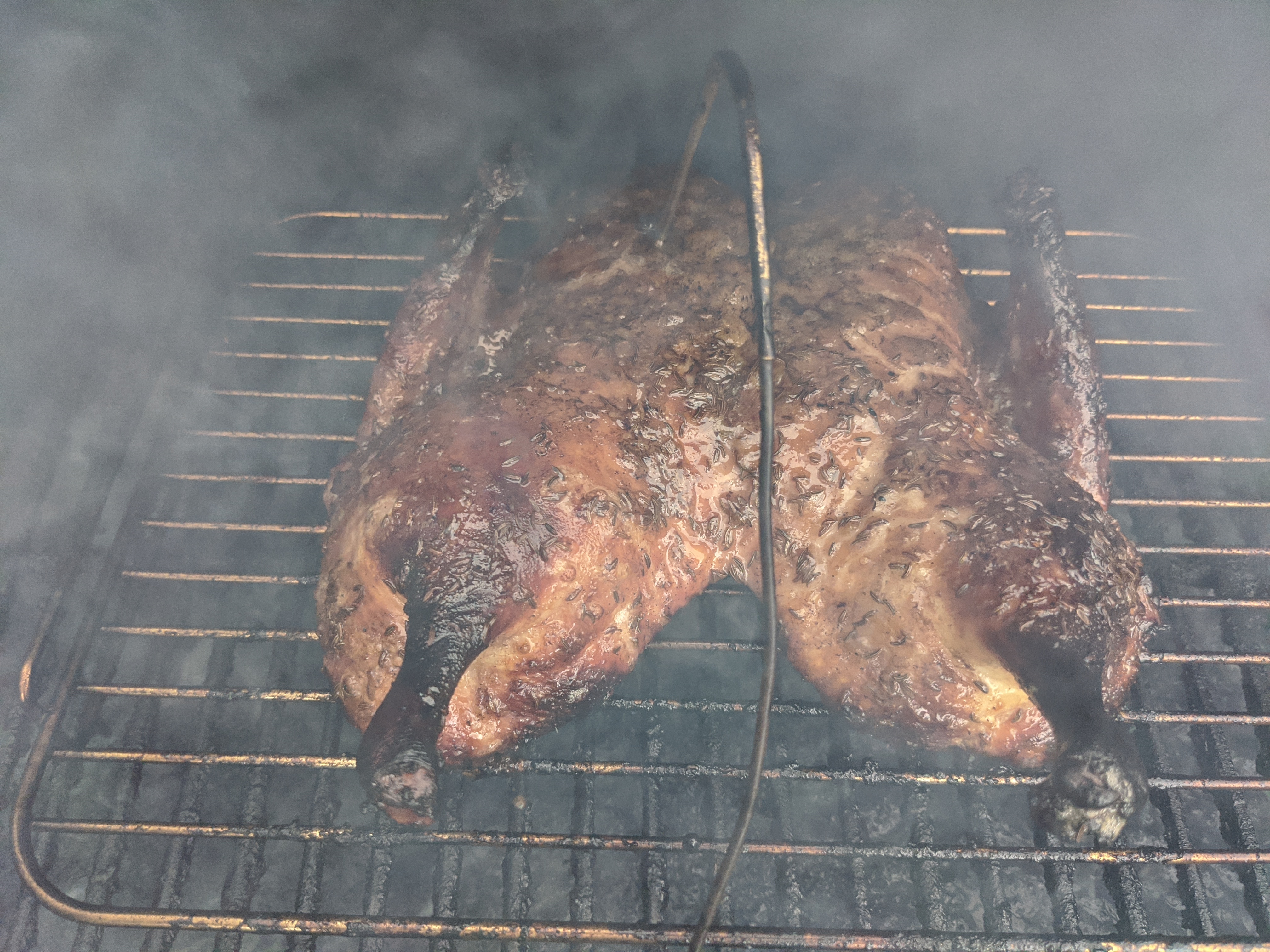 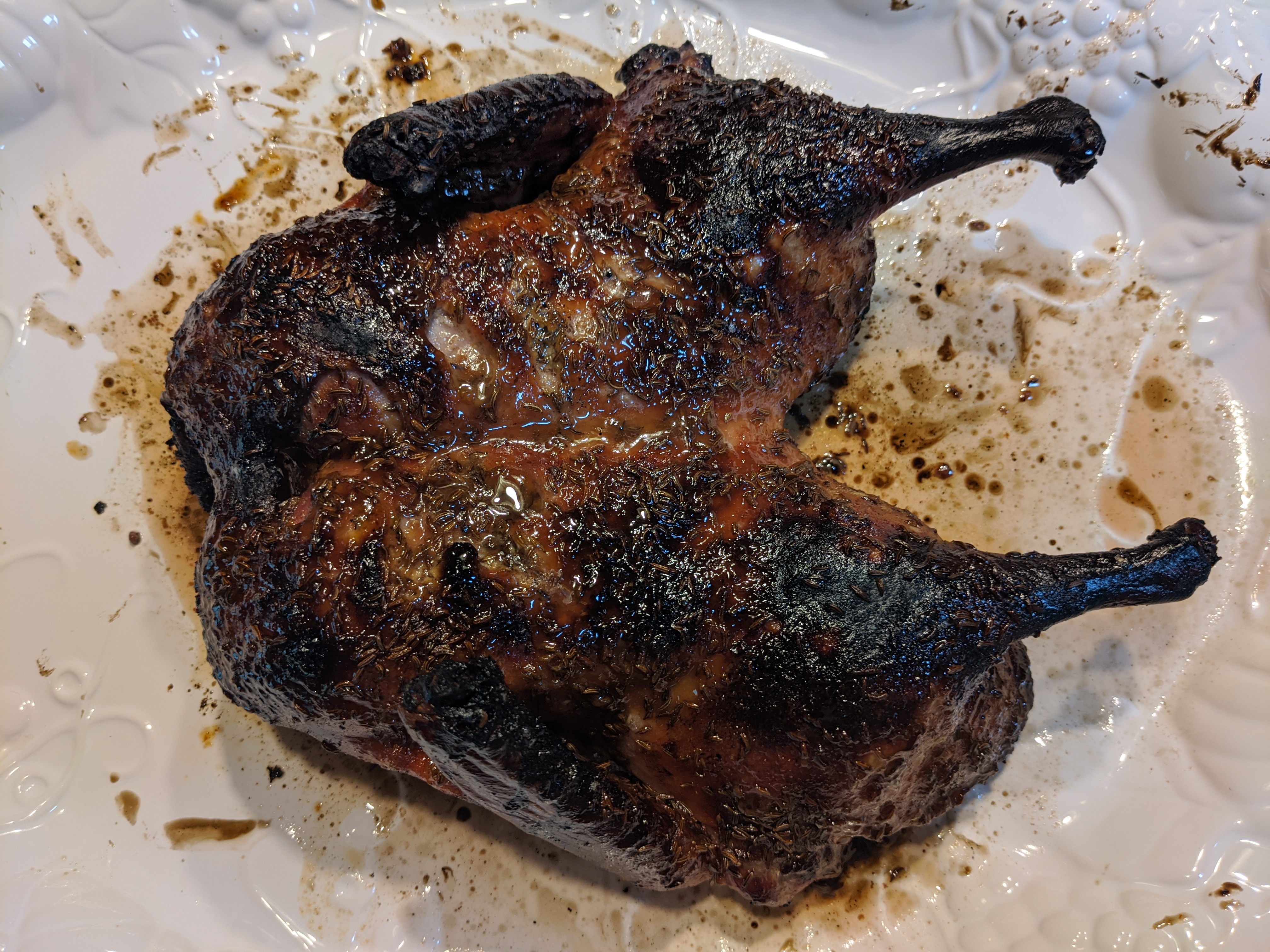