Crawdads Of The Sea

Lobster, for most people, is a rare treat. Lobster is not to be treated casually, and the cost makes it critically important to do a good job preparing it for the table. The Traeger Wood Fired Grill is ideal for this because of its gentle, controlled heat, not to mention the light kiss of smoke we all enjoy.

I started with medium sized tails, about a half pound each. Step one is to split the softer bottom side with scissors and pull the meat out to expose it to the smoke, leaving it attached at the top. Apply kosher salt to taste, a teaspoon per tail is plenty. Use less if in doubt. Let sit for at least 45 minutes. Overnight would be fine.

Step two is to prepare the butter. Place cold butter in a shallow metal pan with spices of your choosing. I like paprika, garlic and pepper. Place the butter pan in the smoker and set to 180ºF. The butter will pick up smoke flavor as it melts. When fully melted, stir the butter and spices together.

About two hours before your planned mealtime, place the tails in the smoker with the butter. Leave the temperature at 180ºF. Let the meat take on smoke and heat undisturbed for about a half hour, then baste with the butter mixture on all exposed meat surfaces. I prefer to separate part of the butter for this purpose, and reserve the rest, just to prevent transfer of lobster flavors to the bulk of the butter. I usually make more butter than I need, and it is tasty on everything. However, I don’t want it mixed with lobster juice. 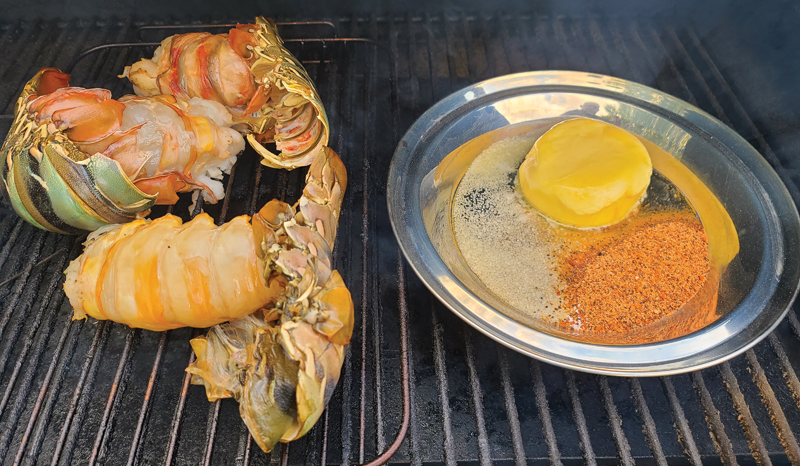 Continue basting every 15 minutes until the meat reaches an internal temperature of 145ºF. It should take about two hours total time in the smoke, depending on the size of the tails. Larger tails will cook more slowly. The meat is done when it is no longer translucent, but always check to be sure the temperature is at least 145ºF for food safety. Lobster gets tough pretty fast when it is overcooked so, unless you like it that way, watch the temperature closely and remove right away when it hits 145ºF. Be sure to remove the butter at the same time, especially if you plan to reverse sear.

At this point, you have the option to serve, or allow to cool slightly then reverse sear. The sear adds some nice flavors, so that is my preference. If you choose to sear, set the tails aside uncovered while the grill heats up to maximum temp. Once the grill gets as hot as it will go, pop the tails back in for a few minutes. When the peaks and thin parts of the meat start showing light brown sear, remove the meat and serve while still hot. 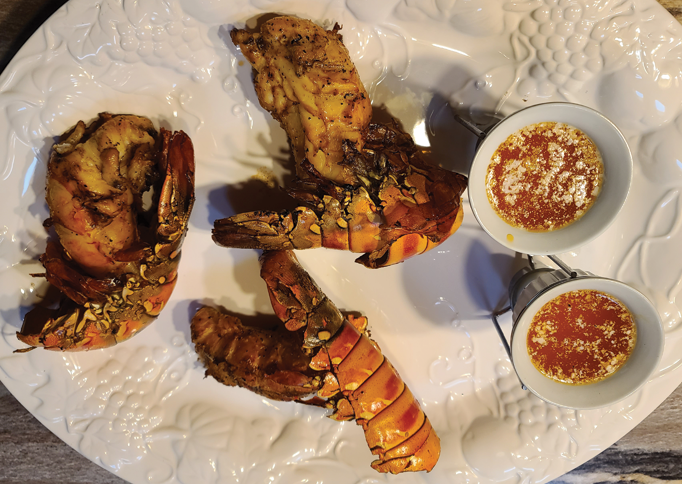 e tails with melted butter on the side. Candle heated butter warmers are a nice touch, but not really necessary if you preheat your butter vessels with boiling water just before adding the butter and serving.

Green vegetables such as asparagus, spinach, or broccoli are excellent side dishes with lobster. Asparagus and broccoli are easily cooked in the Traeger Wood Fired Grill, but require higher temperature than 180ºF to suite most people’s taste. They could be cooked in advance and then reheated with the lobster for a double smoked treat. If you prepared enough seasoned smoked butter, you can drizzle it over the vegetables for a triple smoked treat.