The Best Way to Make Steak or Roast

The Basics of Reverse Sear

Reverse sear is the opposite of the traditional method of quickly searing the outside of meat before cooking for a longer time at lower temperature. Instead, you cook at low temperature until the meat reaches your desired internal temperature, remove the meat from the grill and let it rest a bit, then finally, sear the outside at very high temperature.

The reverse sear method will produce uniform doneness throughout the meat, with a very thin crust of seared meat and very little overdone meat between. The reverse sear method sears faster, and causes less overcooking beneath the crust because the surface will already be dried due to the evaporation of water during the initial cook. Another advantage of reverse sear is that you will get more smoke flavor absorbed into the meat by smoking prior to sealing the exterior with the sear.

On the Traeger Wood Fired Grill, the initial cook can be done with the smoke setting or the 180º temp setting. Any hotter will overcook meat near the surface. Internal temperature should be monitored closely. As an example, this medium-rare prime rib roast was cooked on “smoke” until the internal temperature reached 124º in the center (coolest) part of the roast. The meat should be removed from the heat when it reaches the doneness you want and set aside to rest for at least 20 minutes. During the rest, the center of the meat will warm slightly while the outer layer will cool and become dryer.

The sear (also equally correctly spelled “sere”) is accomplished at the highest possible temperature, from 400º up to as high as 900º. This step can be done in a Traeger, where the hottest temperatures are about 450º, on a gas grill, charcoal grill, kitchen oven, stainless frying pan, or a cast iron pan. An infrared thermometer can be handy to measure temperatures.

The cast iron pan on an outdoor camp stove or burner offers the best alternative for the home chef. Cast iron pans have great thermal mass and can be heated as hot as you will ever want for searing meat. The meat should be buttered, then dropped onto the cast iron. At very high temperatures the sear will happen in seconds. If you flip too soon it’s not a problem, flip it again until all sides have just the right amount of sear for your taste. 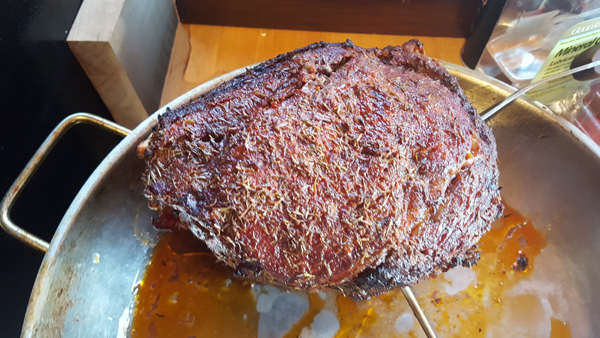 This beautiful prime rib roast was seared on a Traeger Wood Fired Grill at 438º for about five minutes. Before cooking, it was rubbed with extra virgin olive oil, kosher salt, pepper, paprika, garlic granules, and thyme.