In The Nick Of Thyme 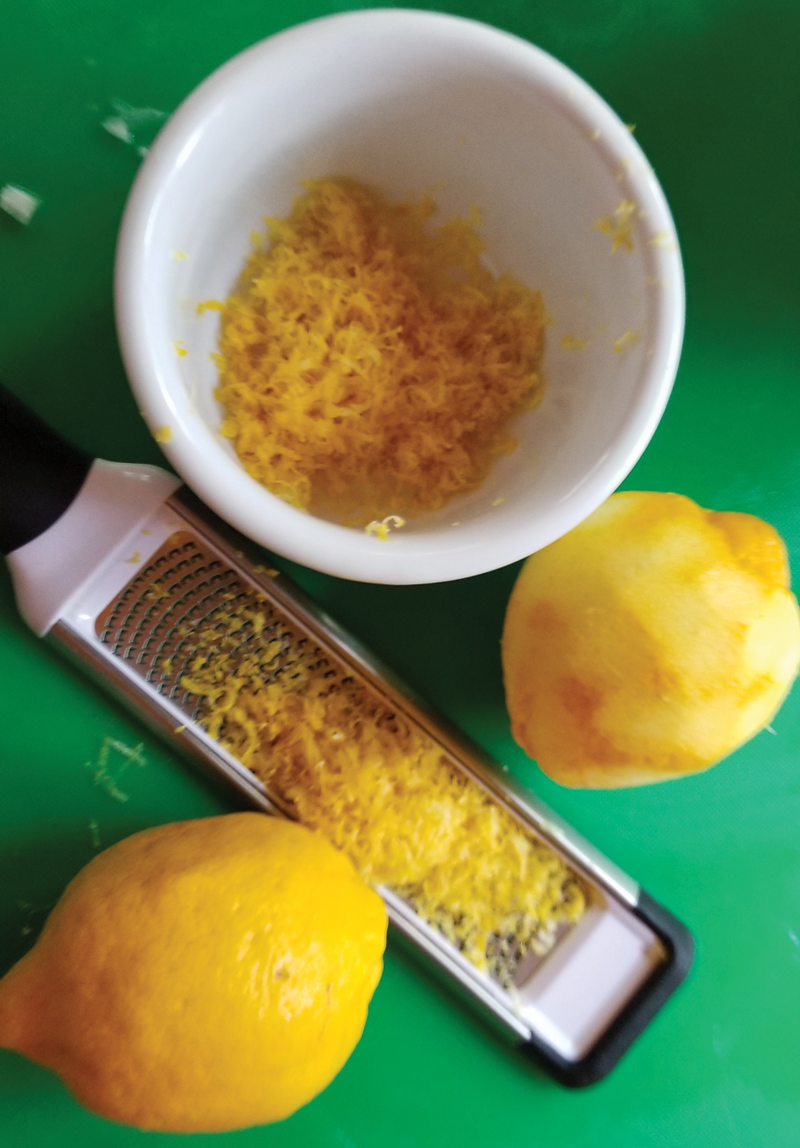 On tonight’s table is a roasted boneless pork loin, stuffed with spinach and bacon, plus other vegetables and spices. Pork loin is a delicious piece of meat when properly prepared. It is inexpensive, often under $2 per pound and widely  available. The loin is not the same as tenderloin. The loin is where boneless pork chops come from. Pork loin is very lean and overcooks easily, so it is very important to control cooking temperature, as well as the internal temperature of the  meat. I recommend cooking to 145ºF, which is the minimum USDA recommendation for food safety before removing from heat, and not a single degree hotter.

The first step in preparing a stuffed roast is to prepare the ingredients for the stuffing and seasoning in advance, while the roast stays cool in the refrigerator. The first ingredient is bacon. Two pounds of bacon. The bacon for this roast was  precooked in the Traeger Wood Fired Grill for about an hour at 250ºF. Bacon cooked at this relatively low temperature is great because it gets crisp without becoming tough or burning easily.

Spinach contains a lot of water, which you will want to remove before using it to stuff a roast. I cooked this spinach and then pressed the water out of it through a strainer.

I sliced all the vegetables in advance. The banana peppers were sliced into narrow strips. I chopped the onions into dime size pieces. I cut the garlic into thin slices. The sun dried tomatoes were already sliced julienne style  in the package.

Lemon zest adds a lot of bright flavor to this roast. I used the zest from 6 lemons in this recipe.

To butterfly the pork loin, the first step is to remove the fat cap and silverskin. Then, cut straight down the center to within a half inch of the bottom surface. Turn your knife 90 degrees to the side, and cut carefully, again, to within a  half inch of the outside surface. Unroll the meat and cut again until the whole side lays flat. Repeat on the other side.

When the whole roast is lying flat on the table, you can apply the spices. Basic seasonings like Kosher salt, black pepper, paprika, and garlic granules are a good starting point. Fennel is a good compliment to the other flavors in this  roast. You can crack fennel seeds by rolling them between your palms, but it works a bit better to do it with a mortar and pestle.

Once the spices are sprinkled generously over the surface of the meat, I used olive oil to add flavor and to make is easier to get the spice mixture evenly distributed. This olive oil inside the meat is good, but don’t use it on the outside because it will  reduce the amount of smoke flavor absorbed by the meat.

After the meat is well seasoned, it is time to apply the stuffing items. Two pounds of bacon was just right to cover the inner surface of the butterflied roast. Next come the onions, banana peppers, sun dried tomatoes, lemon zest, and spinach. 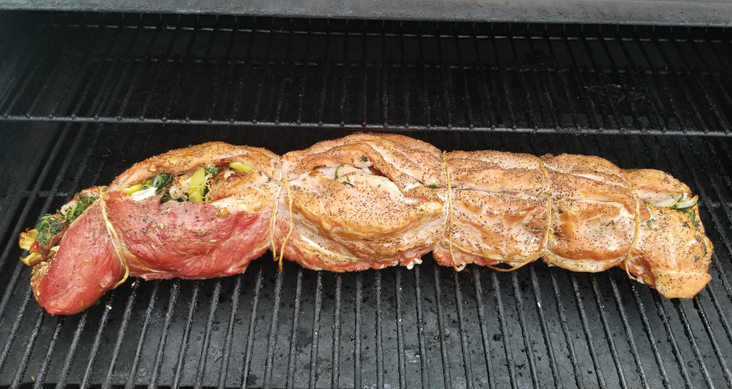 Roll the meat tightly, and tie with butcher string. Apply more spice rub to the top surface. Everything up to this point can be done in advance. If you wish, you can cover the roast and return it to the refrigerator to be cooked the following day.

About four and a half hours before mealtime, place the stuffed loin on the Traeger Wood Fired Grill and set the dial to smoke or to 180ºF. Avoid hotter settings, as they will cause the meat to cook unevenly. It should take about four hours for the internal temperature of the meat to reach the target temperature of 145ºF. As soon as the temperature reaches 145ºF remove the meat from the grill and set it aside to rest uncovered for twenty to thirty minutes. While the meat is resting, set the grill to High and let it get as hot as possible. About five minutes before you plan to serve, put the roast back in the grill to sear and develop a nice browned top. Slice and serve immediately after removing from the grill.

I used Traeger Pecan pellets. Almost any flavor of pellets would have been great, although I would not choose Mesquite for this meal.